Interoception – the perception of signals arising from the visceral body – is a hot topic in cognitive neuroscience and psychology. And rightly so; a growing body of evidence suggests that brain-body interaction is closely linked to mood1, memory2, and mental health3. In terms of basic science, many theorists argue that the integration of bodily and exteroceptive (i.e., visual) signals underlies the genesis of a subjective, embodied point of view4–6.  However, noninvasively measuring (and even better, manipulating) interoception is inherently difficult. Unlike visual or tactile awareness, where an experimenter can carefully control stimulus strength and detection difficulty, interoceptive signals are inherently spontaneous, uncontrolled processes. As such, prevailing methods for measuring interoception typically involve subjects attending to their heartbeats and reporting how many heartbeats they counted in a given interval. This is known as the heartbeat counting task (or Schandry task, named after its creator)7. Now a new study has cast extreme doubt on what this task actually measures.

The study, published by Zamariola et al in Biological Psychology8, begins by detailing what we already largely know: the heartbeat counting task is inherently problematic. For example, the task is easily confounded by prior knowledge or beliefs about one’s average heart rate. Zamariola et al write:

“Since the original task instruction requires participants to estimate the number of heartbeats, individuals may provide an answer based on beliefs without actually attempting to perceive their heartbeats. Consistent with this view, one study (Windmann, Schonecke, Fröhlig, & Maldener, 1999) showed that changing the heart rate in patients with cardiac pacemaker, setting them to low (50 beats per minute, bpm), medium (75 bpm), or high (110 bpm) heart rate, did not influence their reported number of heartbeats. This suggests that these patients performed the task by relying on previous knowledge instead of perception of their bodily states.”

This raises the question of what exactly the task is measuring. The essence of heartbeat counting tasks is that one must silently count the number of perceived heartbeats over multiple temporal intervals. From this, an “interoceptive accuracy score” (IAcc) is computed using the formula:

This formula is meant to render over-counting (counting heartbeats that don’t occur) and under-counting (missing actual heartbeats) equivalent, in a score bounded by 0-1. Zamariola et al argue that these scores lack fundamental construct validity on the basis of four core arguments. I summarize each argument below; see the full article for the detailed explanation:

Zamariola et al then go on to show that in a sample of 572 healthy individuals (386 female), each of these assumptions are strongly violated; IAcc scores depend largely on under-reporting heartbeats (Fig. 1), that the correlation of actual and perceived heartbeats is extremely low and higher at average than higher IAcc levels (Fig. 2), that IAcc is systematically increased as slower heart rates (Fig. 3), and that longer time intervals lead to substantially worse IAccc (not shown): 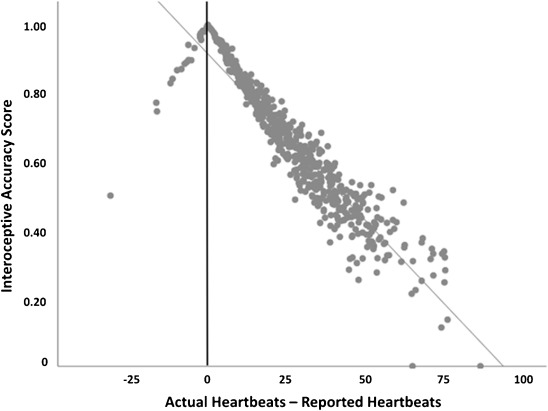 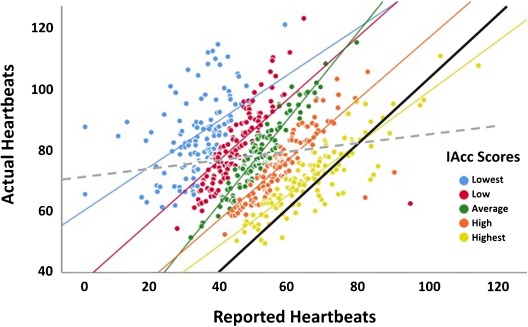 2. Low overall correlation (grey-dashed line) of heartbeats counted and actual heartbeats (r = 0.16, 2.56% shared variance). Further, the correlation varied non-linearly across bins of iACC scores, which in the author’s words demonstrates that “IAcc scores fail to validly differentiate individuals in their ability to accurately perceive their inner states within the top 60% IAcc scorers.” 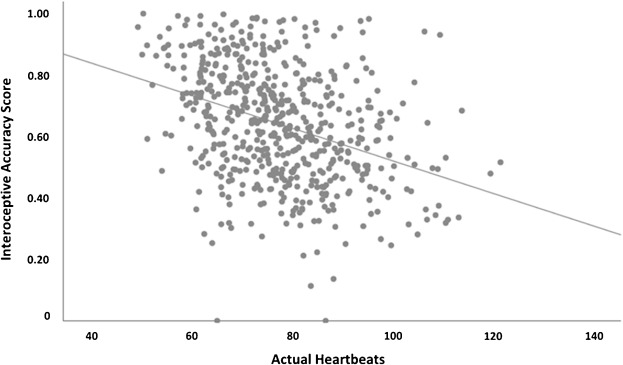 3. iACC scores depend negatively on the number of actual heartbeats, suggesting that individuals with lower overall heart-rate will be erroneously characterized as ‘good interoceptive accuracy’.

Overall, the authors draw the conclusion the heartbeat counting task is nigh-useless, lacking both face and construct validity. What should we measure instead? The authors offer that, if one can have very many trials, than the mere correlation of counted and actual heartbeats may be a (slightly) better measure. However, given the massive bias present in under-reporting heartbeats, they suggest that the task measures only the willingness to report a heartbeat at all. As such, they highlight the need for true psychophysical tasks which can distinguish participant reporting bias (i.e., criterion) from the true sensitivity to heart beats. A potentially robust alternative may be the multi-interval heartbeat discrimination task9, in which a method of constant stimuli is used to compare heartbeats to multiple intervals of temporal stimuli. However, this task is substantially more difficult to administer; it requires some knowledge of psychophysics and as much as 45 minutes to complete. As many (myself included) are interesting in measuring interoception in sensitive patient populations, it’s not a given that this task will be widely adopted.

I’m curious what my readers think. For me, this paper proffers a final nail in the coffin of heartbeat counting tasks. Nearly every interoception researcher I’ve spoken to has expressed concerns about what the task actually measures. Worse, large intrasubject variance and the fact that many subjects perform incredibly poorly on the task seems to undermine the idea that it is anything like a measure of cardiac perception. At best, it seems to be a measure of interoceptive attention and report-bias. The study by Zamariola and colleagues is well-powered, sensibly conducted, and seems to provide unambiguous evidence against the task’s basic validity. Heart-beart counting; the bell tolls for thee.

4 thoughts on “For whom the bell tolls? A potential death-knell for the heartbeat counting task.”

This site uses Akismet to reduce spam. Learn how your comment data is processed.

© Micah Galen Allen and micahallen.org, 2018. Unauthorized use and/or duplication of this material without express and written permission from this site’s author and/or owner is strictly prohibited. Excerpts and links may be used, provided that full and clear credit is given to Micah Allen and micahallen.org with appropriate and specific direction to the original content.